The Escazú Agreement is probably the most valuable instrument in the hands of the Latin American and Carribean countries when it comes to the recognition, safeguard and implementation of environmental rights. However, its effectiveness is not something granted by its mere importances: the countries and societies interested by it still have to show a firm willingness to give this covenant full efficacy. But time is running up.

The Regional Agreement on Access to Information, Public Participation and Access to Justice in Environmental Matters in Latin America and the Caribbean, known as the Escazú Agreement, entered into force on Mother Earth Day of this year (22 April 2021). This is a historic and unprecedented event in the region, which aims to faithfully comply with Principle 10 of the Rio Declaration on Environment and Development, signed in 1992 as one outcome of the Earth Summit.

In the words of Alicia Bárcena, Executive Secretary of the Economic Commission for Latin America and the Caribbean, the Agreement is “an environmental milestone for Latin America and the Caribbean”. Twenty-four countries adopted this Agreement on March 4, 2018, in the city of Escazú in Costa Rica, after over 4 years of negotiations. The treaty was opened for signature on September 27 of the same year. Since then, twenty-four countries have signed it and twelve have ratified it as negotiated. It entered into force 90 days after depositing the eleventh instrument of ratification, which was completed by Mexico on 22 January 2021.

It is worrying that countries such as El Salvador, Honduras and Chile, despite having participated in the entire negotiation process, decided not to honour their commitment to sign by the established deadline of 26 September 2020. Now, the only possible way for them to become State Parties to the Agreement is through accession. However, there is neither the ethical nor the political will to do so: these countries, and those that have not yet ratified the document, are lagging.The entry into force of the Agreement comes at an extremely turbulent, complex and unprecedented time at the global level: the Covid-19 pandemic, which has taken so many lives and continues to do so, adds up to the many crises in which the world has been immersed for a long time, such as the climate change and its consequences, the accelerated loss of biodiversity, water scarcity, the social explosion generated by historical injustices and inequalities that have not been resolved yet. And recently the situation has worsened because of the advance of authoritarianism which has caused severe setbacks in terms of democracy, rule of law and human rights in Latin America and the Carribean, threatening the closure of the already deteriorated civic space. 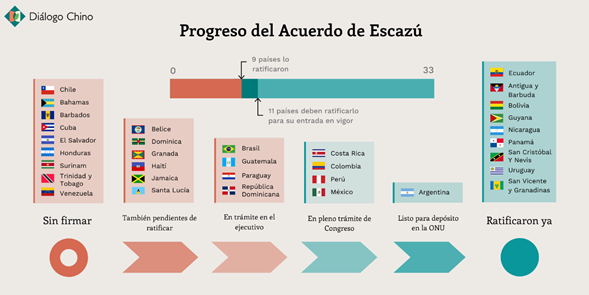 With the Escazú Agreement, the region has a unique opportunity to advance intentionally and decisively in the broadening and deepening of democracy and environmental governance. However, these countries have behaved very differently in this respect: some have taken more solid steps in terms of the recognition of environmental rights, although these have not been fully complied with; others, especially Caribbean and Central American countries, have not advanced significantly as far as the legislation regarding access rights is concerned.

The access rights guaranteed by the Escazú Agreement are essential because they allow access to other rights. At the same time, the covenant establishes valuable provisions to ensure that groups in vulnerable conditions are made visible and duly included in decision-making on issues that impact their quality of life in terms of environmental integrity and the full enjoyment of their environmental and ecological rights. In the region, we can identify groups and populations that have been systematically left behind, such as indigenous peoples, Afro-descendants, rural women, coastal-marine communities and youth. With these, the Agreement seeks to honor this historical debt of exclusion and dispossession to which they have been subjected.

The Agreement also has a brand-new aspect of vital importance and transcendence: the mandate to the States to guarantee a favorable and conducive environment for environmental defenders to carry out their work in conditions of safety and protection. This is the only human rights instrument at the global level that contemplates this responsibility and represents a step forward in the recognition of these people for their commitment to the care and defense of nature.

According to the 2020 Global Witness Report, “148 people in the region were murdered for their work in defense of the environment and the Earth” and the 2020 Front Line Defenders Global Analysis states that “of the 331 defenders murdered globally in 2020, 264 were from the Americas”. These facts highlight that Latin America and the Caribbean is the most dangerous region in the world to be a defender of the environment, land and the rights of indigenous peoples (Global Witness, 2020). A powerful example of this situation is the case of the colleague Berta Cáceres from Honduras, a tireless defender of rivers and water, whose murderer remains in impunity.     While the region prepares for the entry into force of the Escazú Agreement, alarm bells are ringing and threats are being made under the pretext of the recovery and economic reactivation after the Covid-19 pandemic. Many countries are seeking to promote measures harmful to the environment in terms of its integrity and protection, such as infrastructure megaprojects, tourism, extractive industries, exploitation of water resources or monocultures. They all cause great damage due to the high social and environmental costs they imply. The measures announced are incoherent with the repeated calls made by science that we are at a point of no return: our society must correct their course and must understand the urgency to create the conditions to guarantee a healthy life to present and future generations. This commitment widely is absent in the public sphere. On the contrary, political decisions continue to prioritize economic interests over the health and welfare of the Planet and humanity.

The Escazú Agreement represents hope for the Latin America and Carribean region and at the same time should be an instrument to strengthen and accompany the historical struggles of the peoples in their evolution for the care of nature. The peoples and the Earth are crying out for peace and justice and this treaty must include a firm commitment to the defense of natural resources and the continuity of life as we know it. Sustainable peace and durable solutions are possible. This instrument allows us to take decisive steps in that direction.

The Escazú Agreement seeks to guarantee the right to a healthy, safe and sustainable environment. We, as citizens, must be determined to make this dream and common desire of the region become a reality. As a dear friend of my country says, let us think of Archimedes: Escazú is our lever, the fulcrum is the mobilization of our wills coming from the solidarity and reciprocity among peoples. Let’s move the world thinking about the welfare of up to the seventh generation to come, that is the urgent and necessary task to assume.